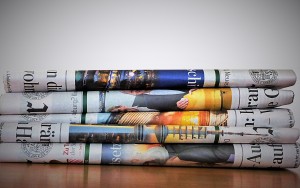 It’s worth remembering when you pick up the newspaper and gaze at the headlines or scroll down an article on a news site or hear the drumbeat of the upcoming news story on TV. It always sounds terrible and they want you to know it’s terrible. A tremor goes through you. You know for sure that the world is gone to hell in a hand-basket. You thought only minutes before how could things get any worse and now here’s a story to let you know. Things ARE worse.

They hooked you with fear. Let’s face it. If it didn’t hit your gut, if it didn’t disturb you, if it didn’t make you want to go bury some cash under a mattress for that rainy day that was much closer than you thought, that tempest, then why would you read on or listen for more? You want to do the right thing and be informed and if the government is going to fold on Monday or the stock market is going to crash again on Tuesday or the war is going to start on Friday, you need to know.

But what are you going to do about the war or the government or the stock market for that matter?

I suppose you could write a letter to your Congressman and sell off what little stock you had, but then what are you going to do? Buy Treasury bills that are backed by a government that is supposedly failing? Put more cash under the mattress that would supposedly be worthless in a few years because of rampant inflation?

The options are few. And you have just successfully wasted a few pleasant hours by being truly riled up. It’s worth considering that somebody got you afraid for their own personal benefit, not really for yours. It’s like a kid sticking out a foot at a playground and tripping you. “Got you,” they should say. Unless you refuse to fall for it. Again.

I’m a sucker for the news. I like to be informed. But I’ve grown wary and weary of the story tellers trying to manipulate me. I forgive them for doing it because they’re just doing their jobs. They need as many eyeballs as they can find to stay in business. I’m glad for them to stay in business because they help me keep informed. But I’ve given up the fear as much as possible.

The angels of the Lord made it their greeting, “Be not afraid.” I try to pay attention to the angels of my own best nature. And I try to choose the times of day when I give the fear mongers my eyeballs. Not too much in the morning. I could end up wasting my day. Better late in the day.