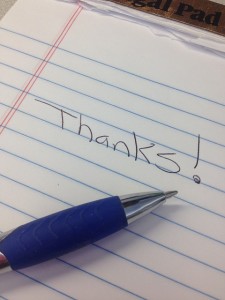 I had a boss who once asked me to compile a list of all the people who had helped me in my job in the past year. Not only that, he wanted me to write down exactly how and what they had done. “What a waste of time,” I thought.

I spent a whole day on it. At the time I was compiling a quotes page in the magazine, collecting over a dozen inspiring quotes each month. For each quote I determined who had passed it along to me and where they had found it. I tallied up the names and how many quotes they had found. It was an illuminating exercise.

First of all, I had to acknowledge how dependent I was on almost everybody in the office. Funny, I had come to rather congratulate myself for coming up month after month with such a wide range of interesting quotes. I’d seen it as one of my triumphs, one done almost effortlessly. How quickly I had forgotten how many others had a hand in my work and how I could never have accomplished it without them.

The second lesson was a little harder to acknowledge. One of my least favorite colleagues, someone I found petty and vain and pushy and obnoxious, the least generous of cohorts, had landed at the top of my list. He was the one who was always giving me good quotes and I used them. Had I ever thanked him? I wouldn’t have wanted to give him the pleasure. But look at this. He was partly responsible for my success. He deserved some credit.

“I’ve done it,” I said to my boss. “I put together that list you wanted. Do you want to see it?”
“No,” he said, waving a dismissive hand in the air. “That was just for you.”
“What should I do with it?”
“You might want to thank some of the people on it.”

I did. Deliberately, consciously, carefully. I needed that record to be able to see what I found hard to acknowledge in myself.

Let me make a curious analogy here. I once met a woman whose drug-addicted husband had beat her. At the police station someone took a picture of the bruises on her face and she kept that photo with her. When her very charming but very dangerous husband tried to lure her back, she looked at the photo. She needed it to remind her of the truth. Otherwise she would have gone back to an untenable situation.

I thanked the colleague I didn’t like for all the help he had given me over the year. My thanks could be very specific. I told him the actual number of quotes he gave me. Let me be clear here. He didn’t become especially nice. We were never good friends. But he was gracious when I thanked him and I appreciated that.

And I’ve never forgotten my boss’s exercise. It’s worth doing every time you congratulate yourself on a job well done. Your good job was probably the result of a lot of good people helping you. Sometimes you didn’t even see what they did. I don’t see a half of what the finance and marketing and I.T. people do at my work. But they deserve a lot of the credit and I rarely thank them.